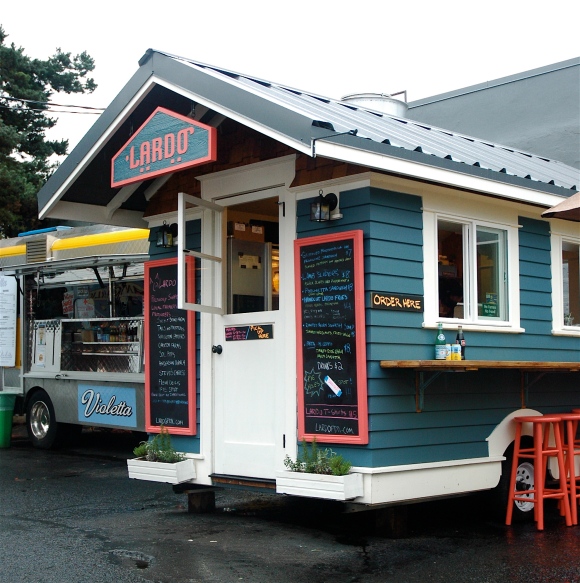 Gabrielle and I stepped out for an early dinner (2:30PM) today at the Good Food Here food cart pod. While there are numerous good choices to be had here we decided on Lardo, because I never say no to rich fatty goodness. . . ever! The word ‘porchetta’ wins. That’s why I chose it. Gabrielle liked the cart’s colors and thought it was cute.

The Porchetta from Lardo is the third interpretation of this sandwich that I have eaten, although I have seen it on a number of menus about town. The popularity of this preparation seems to be taking a real hold in Portland, and for good reason. The wiki claims that it is traditionally made from an entire de-boned pig, which sounds the bomb, but perhaps a bit excessive, especially for a food cart. In every case that I have witnessed thus far the porchetta has been constructed by wrapping an enormous slab of pork belly around a whole tenderloin, with layers of herbs and spices, and perhaps a layer of sausage thrown in for good measure. The whole thing is roasted with the skin on, resulting in a golden crispy crust, and a moist luscious interior. If I had to guess, I’d say that this preparation turns out a good 20-30lb roast, or, just enough to feed Kevin Smith. One of the carts proprietors, Rick, allowed me to snap a photo of his porchetta roast: 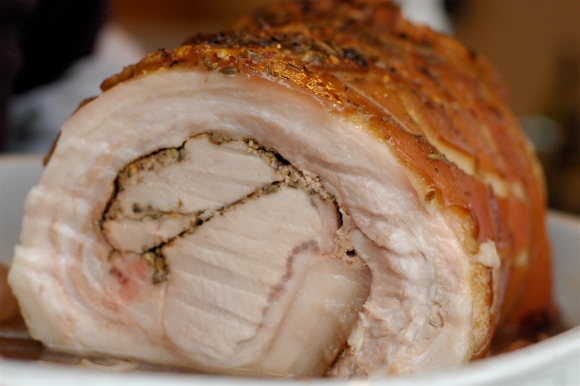 As you can imagine, this is an intensely rich sandwich. Lardo prepares it on a toasted 8″ roll, that’s similar to a ciabatta, but not quite as chewy. It’s crispy on the outside, and soft on the inside, with good olive oil and gremolata on the top side, a couple layers of porchetta, and a caper aioli rounding out the bottom side. Gabrielle and I both thought that we detected a bit of anchovy in aioli, too, but we could be wrong. My first bite was intensely lemony, which gave me misgivings at first, but on second bite there was far less, which led me to believe that I might of just happened to hit on a cluster of lemon peel from the gremolata. The actual porchetta was very good, indeed. Sliced thin enough to be able to bite through effortlessly, yet still maintain the feeling of a hearty piece of pork. This is a point of contention that I have with Chop’s sandwich, in that they make theirs with one large slice of porchetta which sort of causes you to have to tear a bite off of the sandwich forcefully, rather than tenderly. You don’t want to fight with it. A sandwich like this demands to be eaten slowly, luxuriating in its glory. This sandwich was very satisfying, although I must say that I would have to dig deep within to muster the strength to eat another one in the next few days. I’d have to give it at least a week.

One thing I’d like to add though, and this is not a dig on Lardo specifically, but $8 is a lot of money for only the sandwich. What ever happened to a little side of something? I’ll grant you that places like Lardo, and Chop, and the People’s Pig, and Meat Bread Cheese, all use high quality top-notch ingredients, but shelling out another 4 to 5 bucks for a side starts to get really expensive for a lunch. I’m not asking for the world over here, but I’m just saying that something like a few simple pickles or something like that on the side would go a long way–something that you could nibble on in between bites to keep the flavors of the sandwich fresh with each bite. I know price point and profit are a tough game to play, but I think that a small accouterment would raise costumer satisfaction, and result in more repeat business. Just a thought. . .

In any case, Gabrielle ordered the Al Ceppo Pasta w/ a Tomato Pork Rágu. While it isn’t much to look at, it was a very good pasta dish. The noodles were cooked perfectly, and the sauce was rich and meaty, though the meaty part sunk to the bottom of the container for the photo. I only ate a bite or two, and I liked it a lot. Gabrielle was very fond of the tubular pasta shape, and thought that the portion size was very satisfying, just the right amount.

We would definitely visit Lardo again, and I eagerly anticipate trying their fried Mortadella and Provolone sandwich, a picture of wich is featured on their website. We wish them all the success that they can handle! Current Menu, operating hours, and web link are below.

Just a small technicality – Lardo’s using a boned belly wrapped around a boned loin for their porchetta. The tenderloin is actually removed in order to bone out the loin itself. The fries are cooked in lard rendered from T&T hazelnut-finished leaf fat, and are some of the best in the city!