We were out driving the other day and one way or another I hit on an idea that I had from back in the day. It’s a pretty simple proposition, but it is also probably one of the only realistic money making ideas that i have ever had in my entire life. So the question is. . . Who’s ready for a Malt Liquor 40oz Coffee Table Book? Think about it. You know you want one.


The idea is to dedicate an entire double page to each individual 40oz, including, but not limited to, a money shot, an in action shot, a who’s drinking it shot, a rundown of pertinent information, like what the fuck is in it?, and then maybe some gimmicky shit (I present this term ironically) wherein a volunteer would drink their way through (at least) 4 bottles of said 40oz, coupled with a play-by-play analysis of said drinkers level of drunken exploits (this, running on the assumption that each individual different type of 40 will provide a variation of drunkeness, and thus an altogether novel drunken experience (this last point being completely drunk induced.))


So there’s a couple of questions at hand. The first one that comes to mind is “Why am I drinking this nasty beer?” I just asked myself that. i have like a 10th of this bottle of beer left to go, and I think that I am drinking it for pride at this point. It’s pretty bad. I put on some old school Redman, dare iz a darkside, for motivation because earlier I had that drunk-in-highschool feeling that you get from drinking too much of this cheap ass shit and you find you’re all laid out with your body vibrating to the grooves. I put the record on to try and extend that sensation because it was rather pleasant, but now it is kind of taxing. I’m like I’d rather be in bed right now, but I I have to ingest this last bit of swill (just a reminder that this isn’t a High Society site. Or is it?) But, how weak is this? I mean, I drank like 2 beers before I cracked open the 40, and I had a satisfying buzz running, so let’s say for arguments sake that I am at about 54oz of drinking right now. I started at about 9.30pm and now it’s 1.30am, so I’m at 4 hours worth of drinking, I’m pretty drunk, and I’ve only drunk about 4 and a half beers worth of beer. Who am I to decide that someone has to drink 4 40oz of Malt Liquor in order to properly represent themselves in my Coffee Table book. I don’t like to ask others to do things that I should reasonably be able to do myself. So this is the science part. I wanted to dip my toe in the water, to see if I still had what it takes to do that kind of drinking. If we were talking G&T’s I’d be all like what’s up? Let’s do this! But drinking this malt liquor is tough. I find it pretty clear that if you’re drinking this stuff your main objective is to get drunk, not to have a good time. So, that begs the question. . . can you get ridiculously drunk from 40’s and still have a good time, or do you inevitably turn into an out of control raging bull (like in the commercials,) smashing through all kinds of doors, wrecking the bar, alienating all the ladies (except those that can hang, malt liquor-wise, naturally.) I guess we’ll have to see. I’m sure drama makes for engaging coffee table books. 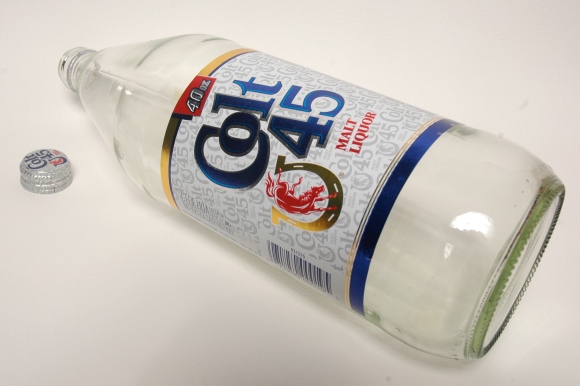