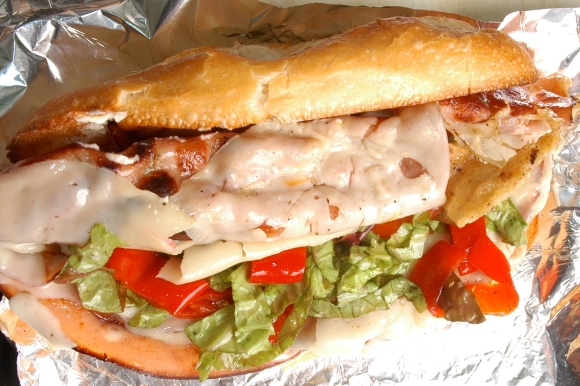 I’ve been wanting weird sandwiches lately, like a fried boloney sandwich1, but without the utter gross of boloney. Luckily, there is this fancy faux-bologna stuff called mortadella that allows me to savor the joys of fried boloney without the possibility of suffering a largely imaginary slap on the taste buds by a pair of raunchy desert oysters. No, that would not due at all. And, yeah, purists, I’m calling mortadella boloney, so up yours! I read up on it before posting, and you’re all full of crap. It’s a beef/pork/whatever loaf with special seasonings in it, and some cubes of fat, and some pistachios and peppercorns, but it is what it is: a fancied-up, yet utterly delicious bologna! 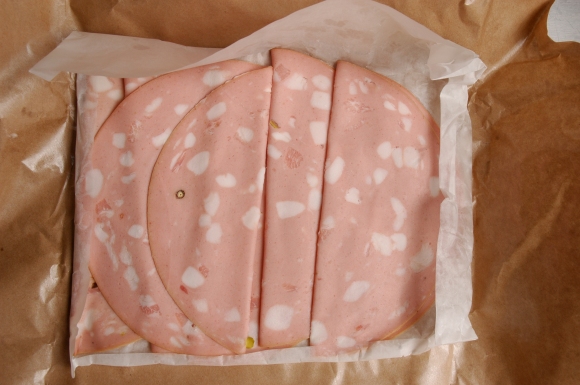 Out of the brown wrapping and into the grill pan! In case you didn’t know (perhaps some perspective was in order?) these slices have about a 12″ diameter, so at least 4 slices are required for a sandwich, but who would argue with more? Start with the grill pan mega-hawt and add a splash of olive oil. They fry up super-quick, and take on an elegant brown blistering faster than you’d imagine, so you have to fry flip and cheese with no delay, otherwise the cheese may not have sufficient time to melt over the meat. 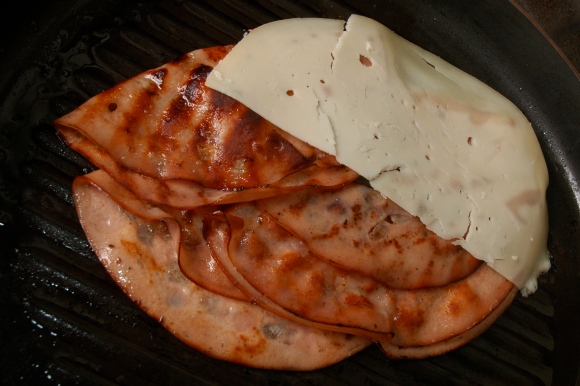 I asked for a few slices of provolone, any’ll do, at the swank cheese counter I frequent, and they gave me a thinly sliced half-lb of the stuff that is melting over the mortadella. I’ve got no idea what it is called, but I recommend dropping some coin on some bomb ultra-lux provalone sometime. This stuff had a crisp, tangy bite. I daresay it made the sandwich. In general, I regard most provolone’s as just something one puts with italian-style meats as a matter of course, just so that you can tell yourself, you slapped some cheese on it, but it’s never been game-changing like this stuff was. I’ve got some inquiring to do… The red things are Mama Lil’s Peppers. I’ve liked these for a while, but lately I have become obsessed with them. They’re kinda like other pickled peppers, except a million times better (literally.) 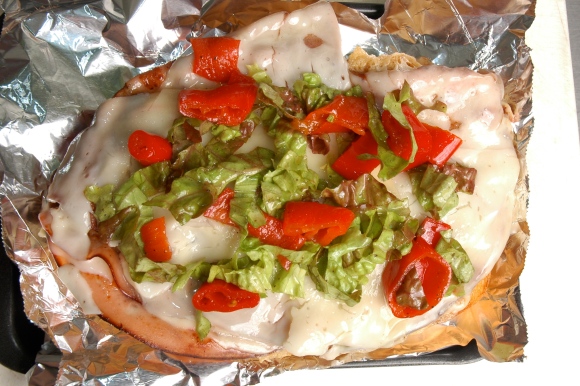 Here we are, at the last paragraph, and I have an admission to make: I totally ripped-off the idea for this sandwich from an venerable food cart here in portland called Lardo, but I’m not ashamed of it. Listen, I’d planned on eating hot dogs for dinner that night, and the meat counter was out of Sabretts! I had to think quick on my feet! And I said to hell with it, I’m making some fried-boloney sandwiches for dinner! (With a side of sugar snap peas for good health…)

Heat a grill pan or whatever, and start toasting the bread. When the pan is hot add a slosh of oil to coat the pan, then slap in the mortadella in single layer. It will fry quickly, so be careful not to burn it, but allow the first side to brown nicely, then flip the slices, and arrange so that they are ready to go straight from the pan to the bread. Add the cheese as soon as possible. Hopefully, the bread is finished toasting by now, and you can quickly add some mayonnaise or mustard or both, or none even. One the mortadella is done on the second side, and it shouldn’t take longer than a minute, transfer it to the bread. Add a hearty helping of lettuce and peppers, and fold it over so that the bread and everything comes together in a sandwich-like manner.


1I can’t footnote the title, but if I could I’d add the same note: I (also, it would seem) ripped-off the title of this post from a great novel about a young man who looks exactly like Sidney Poitier.