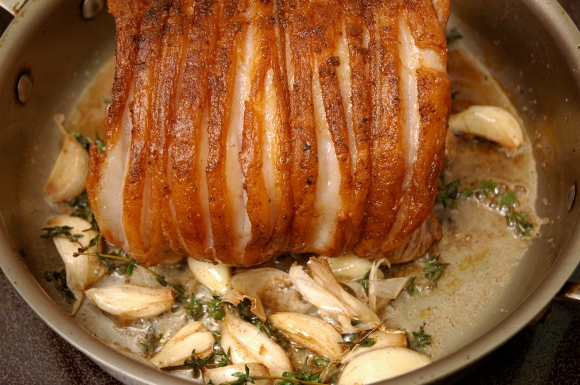 If nothing else, I can slay a pork loin roast! This has become our small family’s traditional Christmas dinner, being that we’ve made it two years in a row. My extended family does a beef rib roast, so this is just a step sideways. Last year, me and a couple of guys went in on a half a pig from Tails and Trotters. As part of the deal I walked away with two of these bad ass roasts. The thing about the pigs from T&T is that they have a ridiculous fat cap:

In this picture I had cut away half of the fatty layer, and it’s still thick as hell! A long time ago I did a fairly unsung post on cooking duck breasts, which have a comparatively thick fatty layer in reference to their general size. If you’ve ever had a really well cooked duck breast, then you know that there are few things better to eat than the crispy, rendered skin on a duck breast. It is simply amazing! Initially, when I saw the volume of fat on these roasts (and the pics in this post is a composite of 3 different roasts) I was pissed! Seriously angry, because I was just like ‘These are all fat! WTF!?’ But then I sat and thought on it, and hit upon the idea to cook them the same way I cook duck breasts, and I started to feel way better about the whole thing. The picture at the top is from the first one I made, with long parallel cuts through the fat. Honestly, they’re all parallel like that because I’d already tied up the roast with kitchen twine, and I didn’t want to do it again. I didn’t actually think to score the fat until after I had tied and brined it.

To render the fat, you have to cook it on the stove on medium to medium low heat. How much you render it depends on how much patience you possess. I’ll spend 45 minutes just on rendering the fat. The beauty of it, though, is that you don’t really need to pay that close attention to it so long as you don’t have the heat too high. Because of the large area, and curved nature of the roast, you have to render it in stages, and my experience is that it takes about 3 stages of rendering at 15 minutes per section, emptying the pan of the rendered fat occasionally. The last one I did took 2 sets of 20 minutes, since the butcher frenched the bones for me (sick bastard. . .) 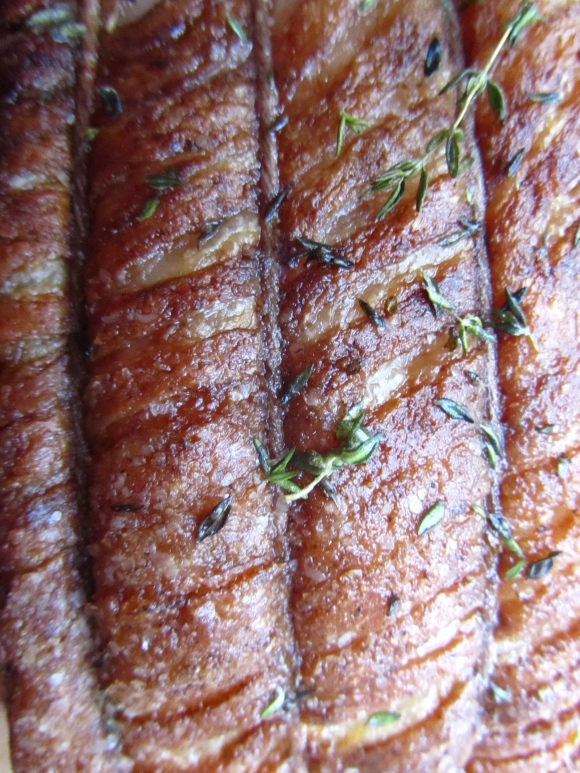 Once you’ve sufficiently rendered it, the roast goes into a 350º oven until its internal temperature reaches 135ºF, basting every 15 minutes. With these roasts it takes about 1 hour. On my first attempt I added all the garlic to the pan as soon as it went into the oven, and 1 hour ended up being a touch too long, so now I add it after 15 minutes at the first baste, tossing it around in the fatty juices in the pan to coat them. The roasted garlic is so good. I recommend adding 2 or 3 bulbs worth of cloves to the pan, as in my experience there never seems to be enough to go around. We consistently fight about who will get the last few pieces!

After pulling the roast at 135º, it is essential to let it rest for a minimum of 15 minutes. The rest will redistribute the juices throughout the roast, and also bring the temperature up to approximately 145º, for medium to medium rare.

This is a wholly unforgivable plate shot of our roast from Christmas 2010, but I share it to illustrate a few things about the process. I did not render the fat long enough, and as you can see there is a great deal of actual fat left around the edge, which is fine, I guess, because there is still a whole lot of the deliciously crispy part. However, the proportions should be reversed––there should be way more crispy part! I tried to remedy this by scoring the fat in cuts closer together and on a diagonal on my next attempt. It proved to be a justified modification. However, on my third and most recent attempt, I scored it in a full-blown diamond cross-hatch, and this achieved the best results, while perhaps not being as pretty as the other variations. The fat rendered better, the crispy bits were thicker and some how more flavorfully power-packed. I recommend this approach most highly. Check the full roasting program below, and here’s to gluttony in the New Year!

Combine the following in a large pot:

Bring to boil, and let it boil for 1 minute, then allow it to cool. (This brine is also great for roast chicken, just add 2 halved lemons.) Once it’s cool, pour it over the roast in a large container and refrigerate for 24 hours.

Remove the roast from the brine, rinse it, and pat it dry. place it in the freezer for about 30 minutes. This makes scoring the fat much easier. With a very sharp knife, score the fat in a cross-hatch pattern being careful not to cut into the flesh of the roast. Once this is done, grate a hearty amount of fresh nutmeg over the fat, and then rub it in with a tablespoon or so of thick grained salt. Next tie the roast off with butcher twine using one piece through each set of ribs. Heat a large heavy-bottomed pan on the stove over medium to medium low heat. If the heat is too high, the fat will not render, but rather it will sear it, encasing the fat within the fat! As seen in the photo above, it is necessary to use some sort of leverage to keep the roast tilted up to one side. I use a wooden spoon, but anything heat resistant will do. Once the roast is in the pan, and the fat begins to render, you will need to pour off the accumulation into a separate bowl. How you go about it is a matter of personal strength and preference. I tend to grab it through the twine with a pair of tongs and hold it over a plate, while pouring the fat into the bowl. This stage will take some time.

Once the fat is sufficiently rendered, and you find that you have a uniform, cripsy, golden crust, move the roast into the oven skin-side up, and lower the oven to 350º. After 15 minutes pull the roast and add the butter to the pan and baste it. Then, add the thyme sprigs and all of the garlic, and toss around to coat. Next, place as much of the garlic on top of the roast as space will allow, and move the roast back into the oven. Baste every 15 minutes, and check the internal temperature after 45 minutes. Allow the roast to continue cooking until it has reached an internal temperature of 135º, then pull the roast from the oven, and let it rest for at least 15 minutes. Finally, slice and serve as you see fit. I like it cut nice and thick, right through the ribs!

Rinse chicken, then dry it off, including the cavity.

Hit it with some salt, pepper, and cayenne.

Place the chicken on a rack in a roasting pan and insert into oven.

Roast until the internal temperature of the thight reaches 155º, about an hour.

Take some chopped up thyme and throw it in the grease in the roasting pan.

Allow to rest for at least 10 minutes.

Carve that bird up and eat it!