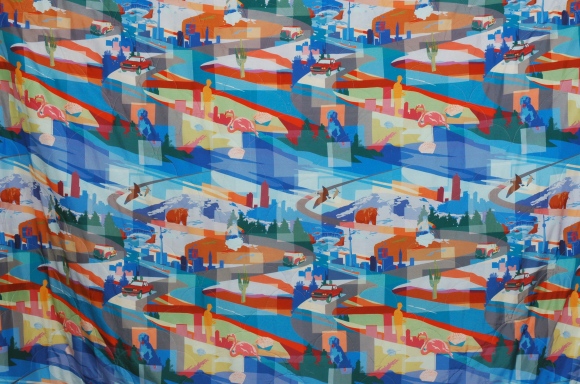 Waking up to this blanket will get you moving faster than ice cubes in your underpants. Once your eyes have adjusted, notice that it is the official Motel 6 blanket, the one from the room we stayed in the other day. Gabrielle and I got an early start that day, enticed by the prospect of all you can eat pancakes at IHOP across the street. So we geared up and were out by about 8:30, which is dead early for us–usually this is when we are thinking about getting out of bed. We actually prefer Waffle House, but you really can’t beat unlimited pancakes with 2 eggs and hashbrowns for 5 bucks (full disclosure: IHOP’s a sponsor (Psych-a-BOO-ski!)) So we at a couple plates, and got moving.

On our way out a member of the Kerrville, TX PD was roping in this crazy old bat that was wondering around outside. I saw her running across the blvd. a few seconds earlier, and the wind was so strong that a gust almost picked her up and put her on the roof of a high school. But seriously, the winds were blowing at about 20-30 MPH, the remnants of the front that blew through east Texas up to Oklahoma, causing all of those tornadoes. Some how we missed the brunt of that front. As we started to pedal it quickly became apparent that we weren’t going anywhere fast. In our easiest gears, we battled down Rte. 27 going a meager 4 to 5 MPH, which, if you don’t ride a bike is slow as molasses, and exceedingly frustrating. Brie likened us to those stupid seagulls you’ll see at the beach hovering above the shoreline. By the time we reached the next town, 7 miles and an hour and a half later, I was ready to call it a day, but we threw caution aside and pressed on. Once we entered the mountain passes the winds lessened to a great degree, and began to calm in general. At this point, the rolling elevations and the beautiful, temperate, sunny day took center stage and things began to look up.

This part of Texas has some problems right now. There has been a drought here for so long, that most of the people we’ve come in contact with have forgotten when it began. It seems that, essentially, the environment is changing over to a desert climate. It is dry everywhere. Everything is either yellow or brown. We have made countless river crossings that are nothing but a bed of rocks, and a lot of these beds have tire tracks so prominent they denote the river is no longer a river, but a road. Despite all of that, there is something alluring about the landscape that keeps the riding interesting.

Despite Brie almost being crushed by this family conveying an ass-boat full of fire wood to someplace or another, the rest of our ride that day was without incident. We passed by these two dudes headed east digging in to this killer pass that we were lucky enough to be headed down, and shortly coasted into Vanderpool where we hoped to find something decent to eat. As we sat outside at the picnic table spooning in mouthfuls of Frosted Mini-Wheats and drinking cans of Juminex two locals pulled up, one on a dirt bike and the other in a pick-up. The driver just about fell out of the truck, before heading in, and a minute later he and the other emerged from the store with a pack of pop-rocks each. The kid on the dirt bike dispensed with formality and dumped his whole bag right through his kisser, while the other looked him up and down and called him crazy with a smirk. I was just like these two motherfuckers just made a trip down to the store for some pop-rocks, and kept eating my cereal, when someone else showed up and bought a bag of corn nuts. I don’t even know. I suppose you get cravings, even in Texas Hill Country.

Well, somehow I managed to get a flat tire between the picnic table and the road. After I fixed that flat, I got another flat pumping up the new tube I installed after the valve broke off. That’s when I had a mini-breakdown because by them it was almost 5:30, and sundown is a little after 6:00. Meanwhile, we don’t know where we’re camping for the night. But, because I was so pissed, I declared that we were just going to have to camp right there on the spot. Gabrielle suggested we go through this gate that was open a few hundred feet back, which made sense because it would get us off the road. That’s when we discovered that every part of this part of Texas that isn’t the actual road is covered with big rocks. I can’t speak for everybody, but I don’t like to sleep on rocks. I had to fix my flat, again, and fast so we could keep moving, and I did so hastily. Luckily that patch held, and we were able to keep moving for the last light of the day. A half-mile further down the road there was a sign advertising a picnic area 1 mile away—-up a basically vertical 500 ft. elevation climb. That is when Gabrielle lost it. Climbs are still hard for us because we do things like eat a shit-ton of bar-B-que every chance we get, and if people are pouring wine, we’ll drink ’till all the bottles are dry. This climb was no exception, and neither of us wanted to do it, but We Bad, so we busted it out.

It wasn’t anything at the Picnic Area but a picnic table and a cold, hard slab of cement, so that was out. However, across the way the shoulder veered off to the side and down into a table covered in deer bones and empty cans of Big Red. What made this a desirable place to bed down for the evening was that some thoughtful somanabitch had the foresight to throw a mattress off his truck right there, we just had to pull it out of the brush. Working the bugged knot out the telephone wire binding it up, we pondered what we’d do if a dead whore flopped out. Releasing the knot, the mattress popped like a jack-knife, and we were somewhat relieved that we would only have to sleep on it, rather than run from it.