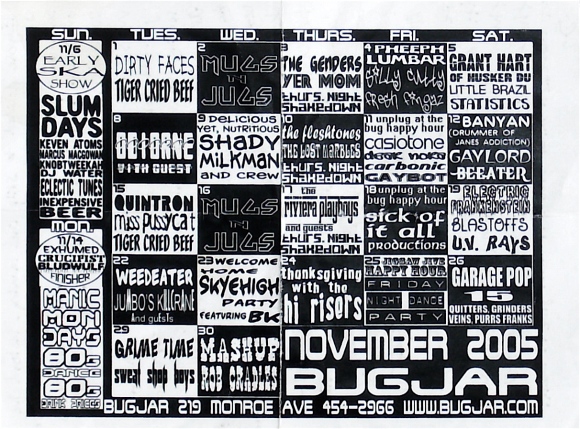 Eugene decided to skip the laundry. Instead he went ahead and made himself a very special cheese sandwich: 2 imitation singles, mayonnaise, and French’s yellow, on darkly toasted Wonder white. He liked his sandwiches to shatter in his mouth. It was like chewy glass mixed with Elmer’s glue. He choked it down bite by bite while leafing though a National Geographic. There was an article about Darwin and Mendel. He didn’t know who Mendel was, but he liked Darwin’s beard. He thought that a thick, full beard was masculine. He felt like jerking off again, but instead he closed the magazine and kicked the cat. Eugene stole the cat from his ex-girlfriend, but now regretted it. The cat was miserable, the damn thing cried day and night. Eugene thought of dumping it on her doorstep, but of course he’d rather drown it than give it back. So. . .

2 replies on “From a Bar Calendar Dated November 2005”

Hi Phil:) So, was that original or from a book?
I think you should write a book regardless..seriously.

Didn’t you receive the copy of my novel I sent you? hmmm. . . I’m still sittin’ on your Twinkies. You know they use Beef Fat in those? WTF?