Fuego de Lotus specializes in arepas, a traditionally handheld street food originating in Venezuala. I was originally introduced to them while watching an episode of Throwdown with Bobby Flay on the Food Network. Essentially they are small, deep fried rounds made of masa harina, a very finely ground corn flour, that are then stuffed with your choice of ingredients. I thought they sounded great as a drunken snacky kind of food, and so I made some a while back in anticipation of being drunken and wanting some. I remember following a recipe that I found through Cook’s Illustrated (which I was more or less addicted to as I was learning to cook, and therefore trusted) that called for a chicken and avocado filling. I made that and one other filling that I can’t recall right now. In any case, they were delicious–creamy pockets with a crisp exterior bursting with an abundance of fresh flavors. I made about a dozen. I didn’t make enough. Once I heard about this cart specializing in arepas I was eager to taste the wares. Well, what can I say? It wasn’t what I was expecting, but it was still very good. However, I will stipulate that we both ordered plates and not a stand alone arepa, which may have been more in line with my preconceived notions of arepadom. 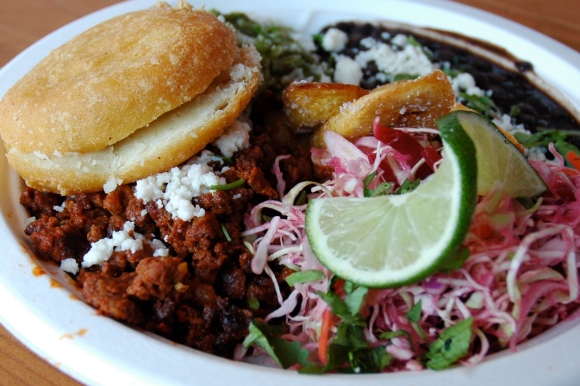 I ordered a plate with chorizo sausage. All plates are $9 and come standard with an arepa, black beans, rice, red cabbage salad, fried plantains, and cotija cheese. The plates were well composed and balanced; the chirozo was medium spicy, and well seasoned, the rice and black beans cooked perfectly, with the vinegary cabbage rounding out the flavors, and providing a nice counter weight to everything else on the plate. I wish more people would include a simple item such as this to their dishes at food carts–something to go to in order to cleanse the palate and start a new cycle of bites. It really makes the meal so much more enjoyable.


This is tough. My only gripe is with the arepa! While it was crispy and savory, I would argue that it was too much so. It wasn’t light and moist on the inside, but rather dense, almost solid. I tried to make an arepa sandwich with it and everything just evacuated the premises when I tried to squeeze it together. I ended up using it to scoop and bite, which I didn’t mind so much as it just wasn’t what I wanted. I feel like I am greatly exaggerating the importance of this, though, because I was still very satisfied with the dish as a whole.

Gabrielle ordered the plate with chicken verde. As you can see, it is virtually identical with the exception of the meats. The chicken verde was flavorful and well spiced. I think I liked it a bit more than the chorizo, but I only tried a bite or two. Gabrielle agrees with me about the arepas, and prefers them they way I made them that one time. However, this difference isn’t enough to keep from going back. On the contrary, we would definitely return, but we might just ask to have the arepas fried a bit less. 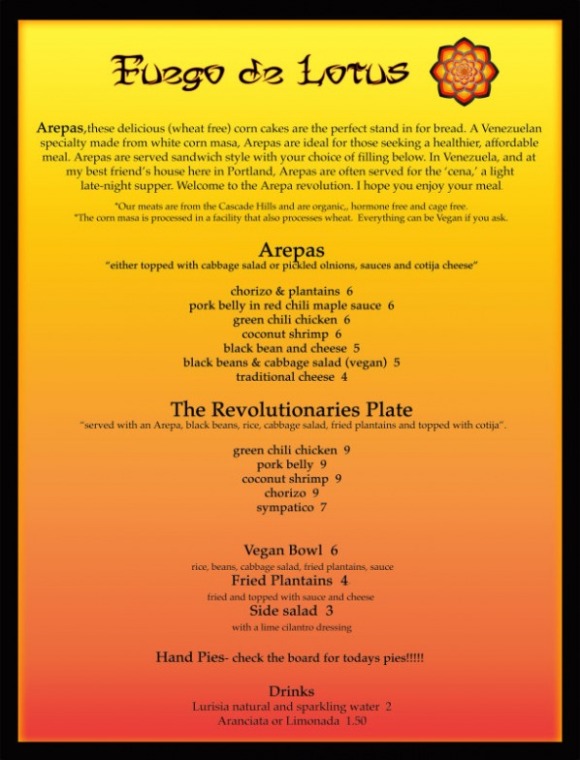 
Located at 32nd & Division in Portland, OR at the D-Street Noshery

Phil did you ever think of looking into a job as a food critic?? Or maybe a chef yourself? Glad you both enjoyed your meals. They look good .

Hi there, thank you for the little write up I appreciate it. I do have to say you are right about the arepas, with it being winter I have to conserve everything to survive and what you had was a day old arepa. Usually when I have a steady flow of customers the arepas one gets is really never more than 2 hours old, resulting in a nice soft fluffy arepa. Please come back and tell me who you are and i’ll make you a fresh aprepa.